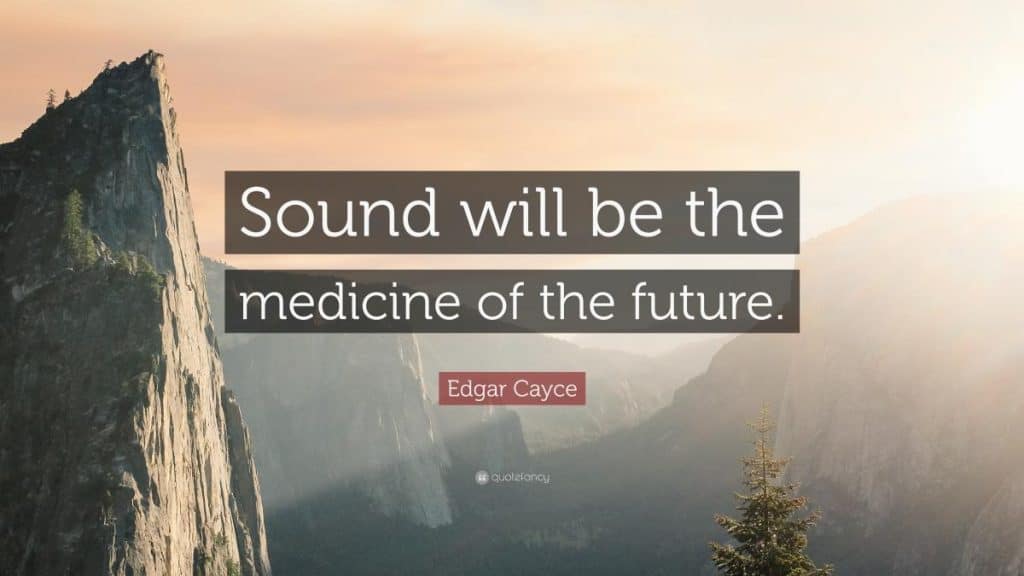 If you are constantly suffering from ailments like stress, anxiety, and depression, there are alternatives to modern medicine. One quickly growing option is sound therapy or sound healing.

People nowadays are leaning towards more natural ways of healing and sound therapy is fast becoming a trend in the alternative medicine world. In fact, Edward Cayce, an American Christian mystic who has answered questions on healing and reincarnation and was nicknamed “The Sleeping Prophet”, has said that “sound will be the medicine of the future.”

What is sound therapy?

The basic principle of sound healing is that all matter is energy which is eternal and in a constant state of vibration, or resonance. This vibration is the basic foundation for all existence.

Sound therapy is often used as a “complementary” medicine alongside orthodox medicine. It is one of the most common forms of vibrational medicine.

Sound has been used for centuries as a healing or calming tool. Thus the process of sound therapy or sound healing involves the use of musical instruments or the human voice to heal certain afflictions. It has been used by different cultures in their healing rituals and has been found to be effective by most. However, it was only explored recently in the scientific realm.

According to some studies, whether it is through humming or drumming, “the influences of certain rhythms, sounds, and vibrations can help us resist and recover from a wide variety of ailments.” — the healing power of sound

The Natural Resonance Center believes that music can alter our physiology.

“Soothing music can produce a response characteristic of relaxation in which autonomic, immune, endocrine and neuropeptide systems are altered. Likewise it produces desired psychological responses such as reductions in anxiety and fear. Some responses have been linked to effects on the hemispheric functioning of the brain and the limbic system. High psychophysiological stress levels inhibit or block learning. Thus music can be the catalyst to facilitate mental suggestion, and enhance our own learning ability and self-healing capacities.” –Natural Resonance Center

Sound therapy and sound healing has been around since the ancient times. It has been used across different cultures all over the world. It may be performed by a Tibetan Lama, a Jewish priest, a Nomadic Shaman, or a cantor.

“Shamans used chanting and drumming to heal people, while ancient mystery schools in Greece, Egypt and India developed sound into a sacred science. The ancient Greeks used the flute and the lyre to heal the body and soul and to treat illnesses such as gout and sciatica. Pythagoras is known to have used specific songs and incantations to cure diseases of the body and mind. There are even theories suggesting that the great Pyramids were constructed using sound.”  — Conscious Wealth Institute

Chants and mantras are believed to have positive healing effects. According to Wellness Vibe, “mantras with Sanskrit sounds are used to balance the chakras and heighten consciousness.”

According to Joshua Leads in the Power of Healing, “everything has a sound, a vibration all its own.” This is true “whether or not we hear it.”

That certain sound is called resonance – it is the frequency at which an object naturally vibrates. Each part of our bodies has its own natural resonance. Vibrational medicine such as sound therapy or sound healing is based on the concept that when our natural resonances get out of tune, a certain type of disease will surface.

Now, we all know that our bodies are made up of 50-60% water. Thus, the healing vibration during sound healing would ripple through you. The healing vibration will be stimulated through the use of human voice or sound baths with the aid of tuning forks and singing bowls. 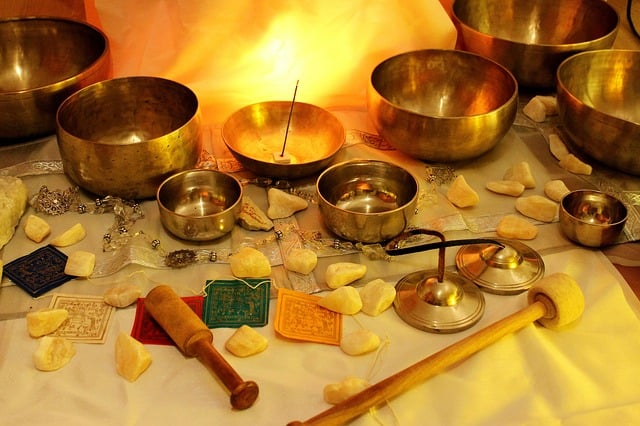 “Sound baths relax our nervous system and activate right brain activity (creative,intuitive side). Our left brain (logical side) relaxes, resulting in less mind chatter. During our waking state, the normal frequency of our brain waves is that of Beta. During the sound bath the brain-waves move into the deeper Alpha and Theta brain-waves frequencies, where profoundly deep healing can occur. Some people might enter the Delta brain-wave state, which is the healing deep sleep frequency.” —GuruMitar

Compared to the faster vibrations used in ultrasound, “sound therapy works more gently – but just as powerfully – to return the body’s own vibrations to their natural states.”

How is it done?

Toning is a form of singing with one tone only, which usually utilizes a vowel sound. Overtoning is similar to toning, however, it uses more than one tone while simultaneously singing. Mantra is the chanting of Sanskrit words.

What is sound therapy used for?

Sleep disorders such as insomnia can be treated through the use of sound therapy. According to Sound Therapy International, sound therapy “cuts mind chatter and allows the mind to move naturally into the slower rhythms that lead to sleep.”

Those with depression have been found to possess lower levels of serotonin or dopamine, which are responsible for helping people experience happy emotions.

Sound therapy or sound healing is believed to enable the brain to produce more neurotransmitters such as dopamine and serotonin, which are responsible for making people happier. With more of these neurotransmitters, the feelings of depression decreases and positive feelings increase.

Sound therapy can help you alleviate anxiety by re‐training your brain to relax, cooling down your “fight‐or‐flight response” and nurturing your “relaxation response”. — AntiAnxietyWaves.com

Sound therapy can help reduce stress as well as its physiological effects. This is done by replacing brain energy with high-frequency sound. Sound therapy calms the brain and nervous centers through the delivery of the energy required to the appropriate “brain centers”. With the calmness that was achieved through sound therapy, neurochemicals are more in balance.

Music has long been proven to help in the treatment of PTSD. According to studies, music triggers the brain to “release chemicals to distract the body and mind from pain.”  Aside from music, songs that have words, whether sung or spoken has, has an effect on PTSD patients. What usually works best for PTSD patients are low-pitched music and sounds or slow music.

During sound therapy, we are taken from the active beta state to the alpha, theta, and delta states. These are states of deeper relaxation, wherein the body begins to regenerate and eventually heal. That’s why sound therapy is often used for chronic pains and migraines, as well as more serious illnesses like cancer.

Sound therapy might not be that popular right now, but it is gaining popularity. However, as stated in the article, The Healing Power of Sound, many experts believe that sound therapy is “at the cutting edge of healing.” They believe that sooner or later, it will finally belong in the mainstream, just like yoga and meditation.